Nightfall Games are very pleased to announce we have acquired the licence for the The Terminator RPG (roleplaying game) from STUDIOCANAL S.A.S.. The licence includes the rights to the canon presented in ‘The Terminator’ movie and all associated ‘The Terminator’ graphic novels published by Dark Horse.

Our writing team for the main rulebook will be led by Andrew E.C. Gaska, while our Quick Start rulebook has been led by Richard August. The rules are being driven by Chris ‘Shep’ Shepperson (the original creator of Nightfall Games’ S5S system) in both cases and will also feature rules for vehicular carnage by Marc Langworthy. We are also in close and late stage discussion with a number of other award-winning writers. More on this in the coming weeks.

“We are looking forward to bringing the world of The Terminator to the tabletop roleplay scene,” said Mark Rapson, Director of Nightfall Games. “We are working hard to getting a free quickstart version out for everyone to try it out before we crowdfund the game.”

We plan to release the free to download PDF version of the Quickstart before the end of 2020, followed by a Kickstarter campaign for the main product in early 2021. It is planned that the product will be in retail for the end of the year, 2021. 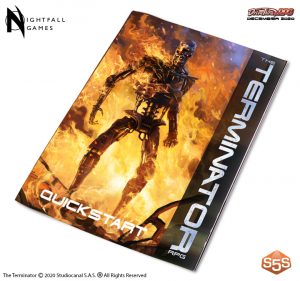 ABOUT THE CORE CREATIVE TEAM

Andrew E.C. Gaska, the ENnie and UKGE Award-winning settings and adventure writer for the ALIEN Role Playing Game by Free League, Drew is a creative director, designer, and sci-fi author with twenty years of industry experience. He is a freelance consultant to 20th Century Fox, maintaining continuity and canon bibles for Alien, Predator, and Planet of the Apes. For seventeen years he consulted for Rockstar Games on titles such as Grand Theft Auto and Red Dead Redemption. Drew has written two Planet of the Apes novels and is also the Senior Development Editor for Lion Forge Animation. He lives beneath a pile of action figures with his glutenous feline, Adrien.

Richard August is a game designer and writer from Manchester, UK. He is Steamforged Games in-house RPG developer, and has written for Modiphius (including the UKGAMES Expo award winning Conan), Chaosium, EN Publishing and others. His most recent RPG project, for which he was lead writer, Animal Adventures: Secrets of Gullet Cove was a massive hit on Kickstarter earlier this year. He, for one, welcomes our robot overlords.

Shep is a games designer and freelance writer from Derby, UK. His credits include SLA Industries, Kings of War RPG, Devil’s Run RPG, Dragon Dice and a whole host of other projects, as well as being the designer of the Nightfall Games S5S rules system. In addition to his passion for all things dark and dystopian, Shep is also a qualified hypnotherapist, kendōka and avid family gamer, who enjoys nothing more than teaching his kids a lesson by destroying them at Netrunner on a regular basis.

Marc Langworthy is an ENnie award winning writer and game developer whose credits include writing and line development for the Devil’s Run RPG, a roleplay game where his innovative vehicle combat rules were first published. He has also written, art directed and line developed a number of projects for Modiphius, Red Scar Publishing and EN Publishing. His work can be found in the Mutant Chronicles 3rd Edition, Conan, Infinity, Hellboy, Kings of War and Judge Dredd RPGs. He likes spending time with his awesome family and occasionally allowing his Orc Shaman altered ego to emerge.

Nightfall Games are Dave Allsop, Jared Earle and Mark Rapson. The company was founded in 1993 in Scotland and is responsible for the SLA Industries RPG which successfully relaunched with a 2nd Edition in 2019/20. Nightfall Games is known for high production values, evocative writing and some of the best art in the industry.

STUDIOCANAL, a 100% affiliate of CANAL+ Group held by Vivendi, is Europe’s leader in production, distribution and international sales of feature films and TV series, operating directly in all three major European markets – France, the United Kingdom and Germany – as well as in Australia and New Zealand.

STUDIOCANAL owns one of the most important film libraries in the world, boasting more than 6,000 titles from 60 countries. Spanning 100 years of film history, this vast and unique catalogue includes among others the iconic Terminator 2, Rambo, Breathless, Mulholland Drive, The Pianist and Belle de jour.

The licence does not currently include any other Terminator intellectual property (including those seen in other movies) nor the likeness of Mr Arnold Schwarzenegger, and only extends to tabletop roleplaying games and RPG accessories.