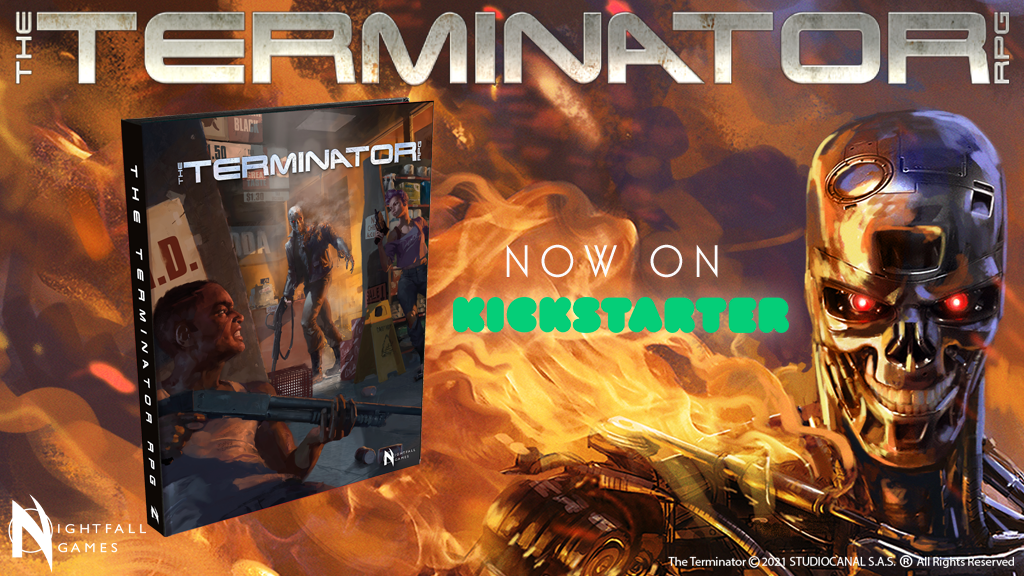 The Terminator RPG by Nightfall Games is a table-top roleplaying game where you and your fellow players play characters trying to survive in a world where Skynet unleashes Terminators to fight humanity.

“Now we have passed our funding level on the Kickstarter campaign, we are looking forward to showing you the world compiled in ‘The Terminator RPG. It’s is not just a role-playing game though—it’s a sourcebook for the Terminator film and its expanded universe. Any Terminator fan will want this gorgeous book on their shelf, whether they intend to play or not.”

Nightfall Games is working with the challenges of the current pandemic and has shifted all their meetings online, chatting on messengers and over the phone as often as will allow, and are working as a team in spite of the challenges this brings. Nightfall Games’ previous project, SLA Industries 2nd Edition has now been delivered to all the Kickstarter backers and the team is now focused on the Terminator RPG.

Jared Earle, production director, teases us with designs for some of the accessories in the Kickstarter.

“As backers of the SLA Industries Kickstarter will know, the design, printing and manufacture of our games and accessories are of the highest quality. We have some wonderful exclusives coming including special edition covers and limited edition dice and dice trays.”

“Terminator has always been a favourite of mine, and it’s great to bring the stable of artists we gathered for Nightfall Games to such an exciting world,”

“I am looking forward to bringing the story to The Terminator RPG like I have already down with the Alien RPG. There is such a rich vein of information to delve into and so many stories yet to tell”.

Nightfall Games are Dave Allsop, Jared Earle and Mark Rapson. The company was founded in 1993 in Scotland and is responsible for the SLA Industries RPG which successfully relaunched with a 2nd Edition in 2019/20. Nightfall Games is known for high production values, evocative writing and some of the best art in the industry.

STUDIOCANAL, a 100% affiliate of CANAL+ Group held by Vivendi, is Europe’s leader in production, distribution and international sales of feature films and TV series, operating directly in all three major European markets – France, the United Kingdom and Germany – as well as in Australia and New Zealand.

STUDIOCANAL owns one of the most important film libraries in the world, boasting more than 6,000 titles from 60 countries. Spanning 100 years of film history, this vast and unique catalogue includes among others the iconic Terminator 2, Rambo, Breathless, Mulholland Drive, The Pianist and Belle de jour.