Nightfall Games are excited to announce that we are bringing the second sourcebook for SLA Industries 2nd Edition to Kickstarter in the Summer of 2021, and it’s one that fans have been demanding for decades.

This hardback book will be part of the Kickstarter for the Collateral source book announced last month and will focus on two playable species: Shaktar and Wraithen. Each species will get at least forty pages of focussed content including a deep dive into their homeworlds, culture, nature and specialised equipment. As with all our books, you can expect our usual high standards of writing, art and production. 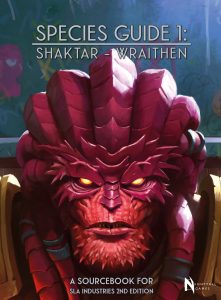 “I have been wanting to do Species Guides for SLA Industries for near on twenty years. To now be in the position to do this book is a dream come true. It was really hard in some respects to decide which two species to start with, but knowing this is the first in a series of Species Guides made the choice that little bit easier.”

“This is the first book within the 2nd Edition range to feature cover artwork by an artist other than Dave and we think Matteo Spirito has done an amazing job. You can really see the sense of honour and duty in the piece. The Shaktar looks like someone on your side, someone you want to be playing in the game. I am so excited to see this Species Guide, and to think, with this and Collateral, we will have published ten books and or PDFs for SLA Industries in the last couple of years.”

“The success of both SLA Industries and The Terminator RPGs, mean that we can now widen our team further. Our last few publications by Nightfall Games have been in-house productions, featuring some talented commissioned artists, but this book will feature commissioned writers too. I’m really looking forward to seeing what Dave and they come up with and seeing them developing the species canon beyond anything that has been seen before.”