You died, you made a deal and you’re back. Sure, you had to make a pact with the devil, or one of them at least, but it’s worth it for revenge. Stick two fingers up to the zealots and burn their shit down, skewer the taxman, kick the guards in the bollocks, spit on your own grave. 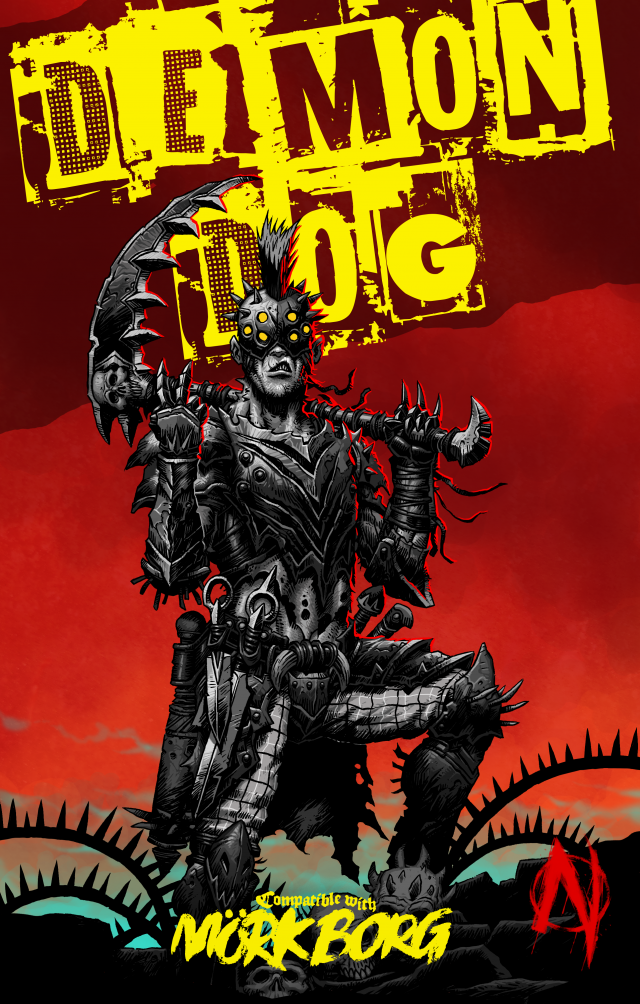 Coming to Kickstarter on August 16th, 2022, Demon Dog is a Mörk Borg compatible setting written by Dave Allsop and Jared Earle, two of the creators of the SLA Industries RPG, and produced with the same quality that has become synonymous with Nightfall Games.

You died. It’s very sad. Get over it.

Luckily for you, you negotiated with one of the six Demon Barons and you get to finish your unfinished business. Go get revenge, seek redemption and … um, oh yeah, you made a pact. You’d better do what the demon wants too.

As a Demon Dog, you get to wander the world, dealing with all those people who deserve a bit of a shoeing. There’s the Clergy and their inquisitors that could do with tasting a headbutt and they’ve got churches to burn. There’s the press that peddle lies to the gullible with an open ear and they might not like it if their scriveners get a wee bit stabbed. What about the toffee-nosed monarchy and their loud-mouthed guards, they might want to go home in an ambulance wagon. Give it some welly.

“It’s great fun coming up with weird monsters in a new setting, especially knowing that the players will have such fun stabbing them in the face,” said Dave Allsop, Nightfall’s Creative Director. “Getting to create a new, exciting Mörk Borg setting, and putting a punk twist on it, is invigorating.” 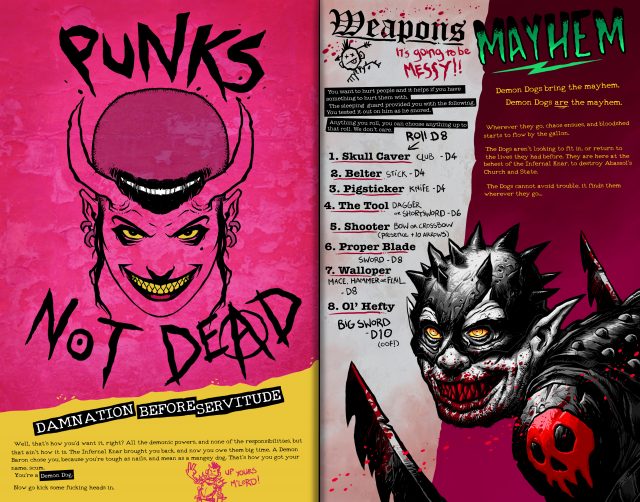 The game is a small-format 80-page full-colour book, a format familiar to fans of Mörk Borg, that gives players a background and setting, including smattering of locations for the Dogs to get drunk in and kicked out of and loads of creatures and baddies to stick the boot into.

“We grew up with Punk and it’s an untapped aesthetic in RPGs. Our love of Mörk Bork and Punk led us to come up with this setting of revenants with unfinished business. It’s unlike anything we’ve done before,” said Jared Earle, Production Director for Nightfall Games, “but it’s very much a Nightfall Games setting.”

With the production of SLA Industries: Collateral and The Terminator RPG coming to a close, Demon Dog will be a smaller Kickstarter than the previous Nightfall Games behemoths, with a much quicker turnaround, before returning to larger projects.

“I’ve been enjoying seeing the designs coming out of Dave and Jared’s fevered brains, and am looking forward to seeing how much fun the players will have in this irreverent setting,” said Mark Rapson, Nightfall’s Managing Director. “It’ll be great to produce something fun before we return to our more serious settings, like the upcoming StokerVerse Roleplaying Game.”

Nightfall Games will be taking Demon Dog to Kickstarter on the 16th of August 2022.

Oh, and beware of the goose.

Nightfall Games was founded in 1993 in Scotland and is responsible for the ENnie award-winning RPG ‘SLA Industries‘ and ‘The Terminator RPG‘. Known for high production values, evocative writing and some of the best art in the industry, Nightfall Games will also be producing the ‘StokerVerse‘ RPG alongside ‘Demon Dog‘, a Mörk Bork compatible RPG, and, in conjunction with Handiwork Games, ‘Harrowvale‘, a Dungeons and Dragons 5e setting.