Nightfall Games is very proud and pleased to unveil the S5S game system from Nightfall games. At its core this system uses upto 6d10s per player, one Success die and five Skill dice.

At present, this system is only available for SLA Industries 2nd Edition, but will be a key part of the Nightfall Games offering over future years. 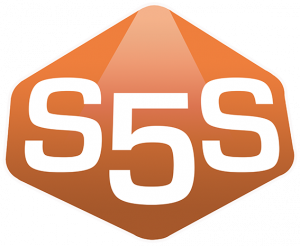 “SLA Industries 2nd Edition features an entirely new d10-based rules system, built from the ground up and designed to offer a more streamlined and cinematic gaming experience than the old system, while remaining true to the setting. Ratings Points are a new mechanic for 2nd Ed, earned from facetime in front of the camera, or through bravery, extreme success and spectacular failure. These points enable players to perform cinematic feats that defy the norm and impress audiences, and when things don’t quite work out, there’s the new Luck mechanism that allows players to alter or re-roll dice results. Both Ratings Points and Luck are a finite resource, however, and should not be used frivolously.”

In the following video Shep, the designer of the S5S system, talks about the mechanics for the SLA Industries 2nd Edition Kickstarter, including the key parts of of the new system.

Since then the Nightfall Team have been finalising SLA Industries: 2nd Edition and securing the future of the company. SLA Industries is core to this future, but we additionally plan on becoming more than a ‘one trick pony’ (Ed: even though it is a rather impressive trick). As such we are developing 2 new games. The first, which will be announced fairly soon, will use a well known games system. The second though, will use the S5S system as its foundation. We also expect future publications to do the same.

More on this later!